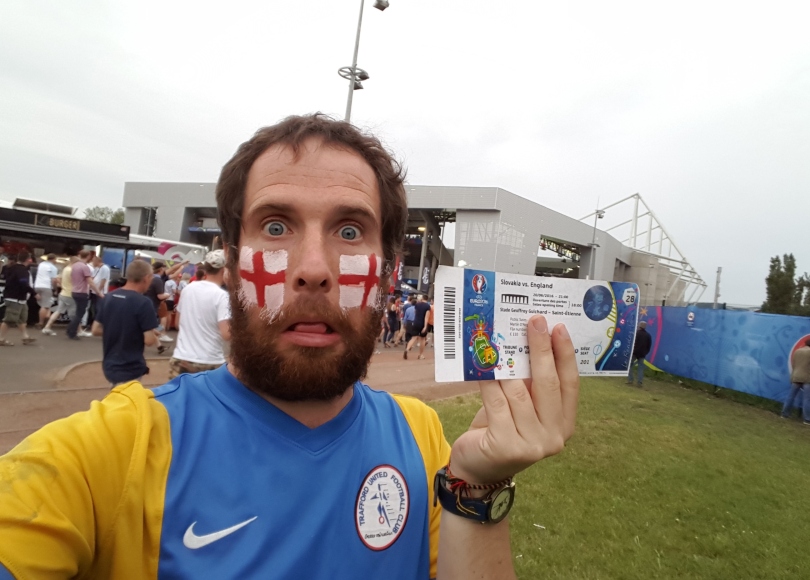 One more game to go before the knockout stages and a point against bottom placed Slovakia will be enough for qualification. A win would see us comfortably through as group winners.

For the first time in this tournament, I was actually going to get to the stadium and see the game myself. I was to be joined on this leg of the adventure by my close friend and fellow football addict Arthur, a Dutch freelance journalist who had stayed at my house couchsurfing two years previous. Given the shortage of accommodation, I thought we could go full circle and try couchsurfing here. We were lucky enough for our request to be accepted by St Etienne season ticket holder Cedric, who also had a ticket for the game.

I arrived from Paris to Cedric’s place on a peaceful little square in the centre of town and waited for Arthur. On his arrival, we set out for a few beers. With a small town centre, Cedric knew exactly where to take us. We ended up in another nice little square surrounded by bars and cafes. However, all the bars were closed; the reputation of the England fans had preceded them. Only one place – that of one of Cedric’s good friends – had remained open. Setting up an external bar and playing England football anthems from a loudspeaker ensured this was the place to be in town and the atmosphere was electric. All fans were in good spirits and the atmosphere was bubbling away nicely.

Being a cameraman and videographer by trade, Cedric saw an ideal opportunity to make a video which has now been viewed many millions of times in its different formats. Having heard the song previously, he asked his friend to play ‘Freed from Desire’, which in this environment became ‘Vardy’s on Fire’. The video does more justice than any words ever could.

After a few beers and a sing song, we were all ready for the big game. Having only heard a few Slovakia fans around town, we were expecting a strong atmosphere in our favour. The last England game I attended against Costa Rica, Hodgson rested all our best players, and much to my displeasure he decided to do the same again. Captain and man of the match for the previous two games, Wayne Rooney, was left on the bench, along with 5 other starters from previous games. The risk here was a loss of momentum but only time would tell.

I took my restricted view seat and quickly decided I didn’t fancy staring at the back of a cameraman’s head for the whole game, so I opted to seek out a better spot. From here I joined some England fans for the simple but wonderful rendition of ‘The Great Escape’. We sang with pride for what seemed like the majority of the match. Sadly the atmosphere in the stands wasn’t to be reflected on the pitch and despite almost 30 attempts on goal, my previous international experience held true and the game petered out into a lacklustre – you guessed it – 0-0 draw. As suspected, Hodgson received a lot of negativity from the press for his team selection, leaving England with a slightly more difficult path to the final. More annoyingly for me, I now had to sell my tickets I had for the game in Lille and make my way south to the next stop on the journey, Nice, to try and find a ticket.