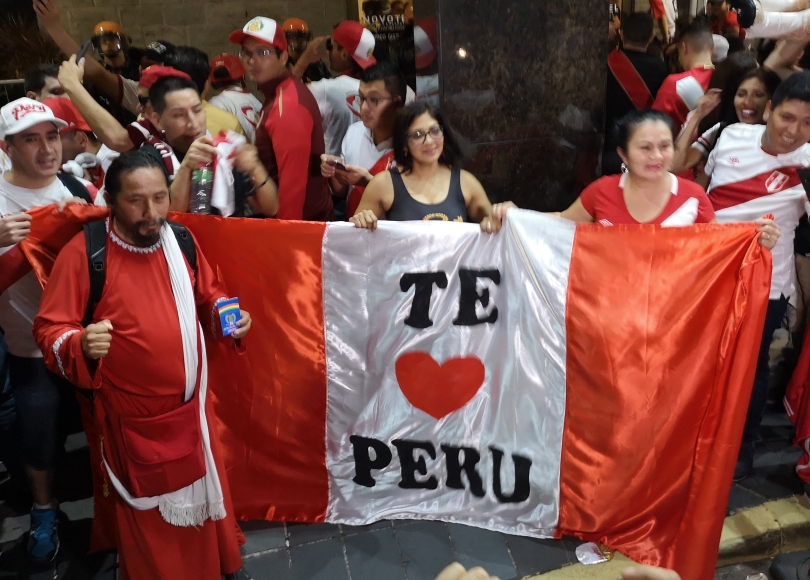 The time finally came for another international tournament, and a perfect excuse for me to return to one of my favourite countries with great memories of previous adventures there. This year Brazil are to host the 46th edition of the Copa America, the tournament where all countries in South America compete. The two guest teams would be Qatar – I imagine to raise their profile before their 2022 World Cup – and Japan, who are sending an inexperienced squad in preparation for next year’s Olympics in Tokyo. Sadly no sticker album this time but all the same, the preparation was complete and luckily my good friend Gabriela had sorted out all the tickets in Brazil so I had the easy job of just turning up.

Due to a 5am flight from Manchester there was little point in sleeping the night before, so by the time I’d arrived in Sao Paulo via a stopover in Amsterdam I was a little jaded. But what better way to liven up than heading straight to a match? With only one night in the continent’s largest city, it was incredibly lucky that my favourite Brazilian team, Palmeiras, were playing at home.

I met Gabriela and we arrived at the stadium to be greeted by a sea of green shirts just in time for the game. On top from the start, it took just over half an hour for ‘Porco’ to open the scoring to the delight of the ‘Mancha Verde’, who didn’t stop singing, dancing and jumping for the duration of the game. It appears the Brazilian league is also having teething problems with VAR, as it took a full 4 minutes for them to retract the linesman’s offside call. Another Palmeiras goal just after the hour lead to a comfortable and deserved 2-0 win, a rather standard scoreline in a top versus bottom game where an upset never looked likely. Less so than ever when Avai sent on a what looked like an ageing Robbie Williams tribute act – with his portly figure, he would have been better placed plying his trade in the Lancashire and Cheshire League. Sigue o lider.

Outside the stadium I immediately felt back in Brazil. With the street sellers and their fridges full of beer, Skol, Brahma, Itaipava, the memories came flooding back. Being three years since I was here, it was one of the day’s highlights to see that all these guys now accepted contactless, something I could never have imagined on my last trip here.

The next morning I flew straight to Porto Alegre for the start of the Copa America. The hotel was full of Peruanos, with not much sign of any travelling Venezuelans. That, combined with a successful stint managing Peru on Fifa and some great personal adventures in the country, meant it was an easy choice who to support for the following day’s game. One roommate offered me a Peru shirt for the evening and off we went to the players’ hotel, where the drums were beating, a huge flag was waving and hundreds of Peruanos were singing passionately – a great show of support for the players who even popped out to show their gratitude at one point.

Next up it was off to the fan zone. Hosts Brazil were to open the tournament, with Bolivia their unfancied opponents. Given the gulf in class, it was always going to be a difficult task of breaking down the deep-lying opposition defence. By half-time this hasn’t been achieved and after a lacklustre performance, the home team were greeted with boos at the interval from their dissatisfied fans.

In the second half Philippe Coutinho (£2.26), stepped up to the plate in the absence of the injured Neymar (£6.94) to score a couple of goals. Everton netted with a beautiful strike to leave a nice gloss on the scoreline. The 3-0 victory left the home fans happy enough and got the tournament off to a positive start. On a less positive note was the attendance; a mere 47,260 turned up to the Morumbi, which holds up to 66,795. The fact it was still the highest recorded takings at the gate in the history of Brazilian football shows how grossly overpriced the tickets were, averaging 485 reais, approximately £100.

Back in the fan zone, the afterparty got going with the Peruanos enjoying the Brazilian vibe for the next hour or so. Once the music stopped the singing began and it took some time for security to move them on. The singing continued into the streets and back to the centre and this was pretty much the theme until the early hours.

Feeling rather worse for wear after a long night of drinking fuelled by just a child’s portion of pizza at the fan fest, I felt bloody awful the next day. 30 degrees and 70% humidity was not what I needed, but I struggled out of bed and into a taxi. Running late I stomped up the many levels to my seat up in the gods. By this time, not one part of my body was dry but hey:

‘I’m here now, time to enjoy the game and a great atmosphere…

As I took my seat and turned round to face the stadium, I was greeted by something more akin to something you would see at an FA Vase final at Wembley. A paltry 13,000 filled not even a quarter of the 60,000-seater Arena do Gremio. This really took the edge off the game and wasn’t anything like what I had imagined the Copa America to be, but this was further proof that the local people had been priced out of buying tickets. It actually worked out okay for me as I wasn’t feeling very sociable, so I decided to make my way to one of the many empty stands to enjoy the match.

Back to the actual football and VAR played a key part in correctly disallowing two Peru goals. The game’s other major highlight was the witnessing in the flesh of forum favourite – ‘The Ferret’. The fastest player in the world, Luis Advincula (18p), made some marauding runs down the wing and offered the most threat of any player on the pitch. Other than those brief moments, a fairly drab affair ended in a 0-0, a fair reflection of my day and an extension of my curse on international games in Brazil. My record now stood at 8 games, 5 nil-nils. Get your bets on now for Japan vs Chile.

The bus driver doing his finest Ayrton Senna impression managed to get us back to the hostel in time to watch Argentina fall to a defeat at the hands of Colombia, the first big result of the tournament. A nightcap in the vibrant Ciudade Baixe, and it was an early night before a day of tourism ahead.

The joys of hostel life were in full flow as the snoring and latecomers made for a horrible night’s sleep. You do truly need to be pissed yourself for them not to be incredibly annoying; luckily, I usually am. So my plan for the day was to walk to the market, scout for a watch but never buy one, as usual, then mooch around and see what there is to see. A few men selling fruit was as exciting as it got so the mooch started earlier than planned. Being by the river, I had two options of north or south. I headed north through the dusty, dry streets with ageing decayed buildings, when I was intrigued by the sound of a passionate man on a microphone.

It was some sort of religious gathering in more of a warehouse than a church, so I wandered in, standing out slightly in shorts and TUFC stash amongst the men in their Sunday best. Thank God I’d worn my holy pants though. I watched for around half an hour in total, mesmerised by the whole concept of a bloke on stage basically asking for money from the congregation, my favourite bit being a few parishioners holding out fishing nets at the front for the money to be collected in. Although briefly entertaining, it was later confirmed as I’d suspected that it was just a con to take advantage of people’s faith and good nature. Knowing what I do of Brazil, it was no great surprise to be honest.

Carrying on my journey, I continued for another hour north and the architecture didn’t improve remotely. In fact, it got a little sketchy at times when I ended up in some incredibly poor neighbourhoods, where there were piles of waste and people searching through in hope of finding something useful. Knowing the value of what I had in my pocket made me feel a little vulnerable, but in fairness there was no point at which I was ever made to feel uncomfortable and I was able to continue my journey to absolutely bloody nowhere freely.

After a long walk back I finally found the nice part of Porto Alegre. A 10 minute stroll south of the centre was a lovely little promenade full of friends and family enjoying their afternoons out in the sun down by the river, with Churrasqueiras and Mate everywhere you looked.

With a relaxed ending to the day, there was time to watch Qatar show courage and skill to come back from two down to draw against Paraguay, before Uruguay comfortably dispatched 10-man Ecuador 4-0.

The next morning I said my permanent goodbyes to Porto Alegre and boarded the flight back to Sao Paulo for the next instalment of the Copa America.