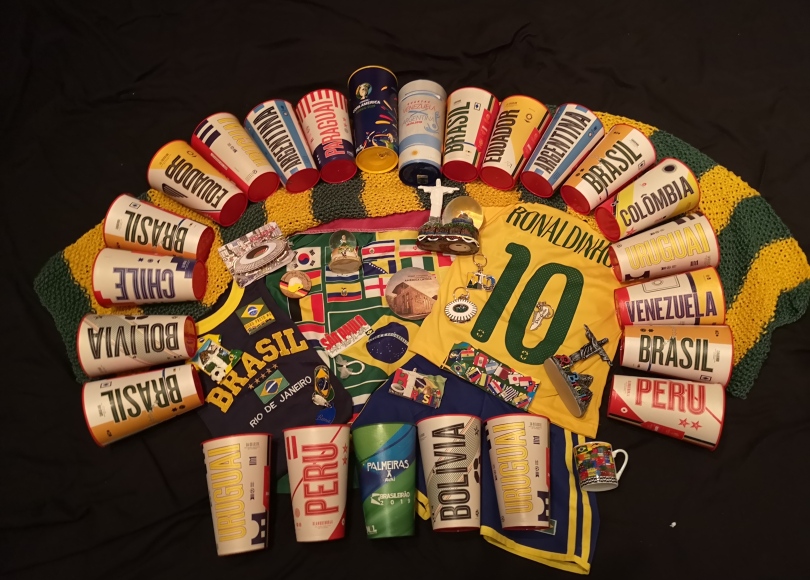 Ruthlessly our hostel owner wouldn’t allow us to spend the day relaxing in the hostel so it was off to the Bus station six hours before the night bus, sadly Gabriela had to return home to Sao Paulo after a lovely two weeks sharing my Copa adventure with her. But for me it was back on the now familiar night bus to Rio. Halfway there I was woken up by a sound I hadn’t heard since I left by beloved Manchester. The beautiful homely sound of rain. Being Brazil, when it rains, it really rains, this certainly didn’t bode well for my plans of beach football.

Arriving at 8am to my hostel at the bottom of a Favela, I was planning to muster some energy to finally check out Christ the Redeemer. With no let up in the rain there was simply no point in heading up there just for the sake of it, I guess that means I’ll need to return for another adventure someday. As a result a relaxed day of writing and resting ensued and the day culminated with a catch up with various friends and a rather chilled night of drinking in Lapa.

More of the same followed the next day as we watched Argentina clinch third place despite the ridiculous dismissal of Messi, a sorry ending for the great man, rubbing salt in the wounds of the failure against Brazil. On the home strait of the trip, it was finally time for some souvenir shopping before heading to Leblon for my final night out.

Over the last few days I had been tracking the final ticket prices on Stubhub.com. Beginning at £500 straight after the semi-final, they had been gradually reducing daily but with no fixed abode I didn’t purchase one, feeling I could pick something up at the stadium. Out in Leblon – the most affluent area in the heart of Rio – I had to worry no further. Arthur bumped into his new friend Kris who just happened to have a ticket and was more than happy to sell to a friend for face value. Job done. $R400 (£80) and I was sorted, off to the final it is.

On Final day, I met up with Kris to collect my ticket, nine years previously he had a chance opportunity to go to the 2010 World Cup in South Africa with his journalism company and never looked back. His current role consists of picking and choosing which major sporting events to travel to and get free entry, not a bad little gig. Now in my 5th tournament this was the first time I’d made it to a final and the mood was building, the now more than familiar Brazilian football songs were being sung outside the stadium and Los Peruanos certainly made their presence felt too.

Now fully fledged into the Brazilian way I just stood wherever I fancied in the walkways and made myself comfortable for the game. Once again, I had the great pleasure of enjoying the passionately sung national Anthem of Brazil and off we went. My accent stood out quickly whilst cheering on Brazil which led to some good chats with the locals. It wasn’t long before we were cheering a goal as Gabriel Jesus (£2.28) crossed for the new face on the scene Everton Soares to volley home to ease any growing tension in the stadium.

This time determined to get some beer without hassle I headed for the concourse after 35 mins. Beers in hand and a very happy man, my return was perfectly timed to see the Peruvian legend Paolo Guerrero (£0.15) lining up to take a penalty after Thiago Silva (£0.31) was adjudged to have handballed in the area. Despite the pressure of the biggest moment of his career, Guerrero maintained his composure to send Alisson (£0.81) the wrong way.  The first time the Brazilian stopper had been beaten in 900 minutes and the first occasion the Brazilian defence had conceded in the Copa.

Order was quickly restored as the darling of Brazil – Gabriel Jesus – slotted home neatly after a surging run from Roberto Firmino (£1.42). Brazil went into the break leading 2-1 feeling confident of victory, and I smugly went back to the concourse to watch the queues while comfortably supping my beer.

The second half again saw the home team on the front foot but a failure to kill the game off looked like it could come back to haunt them when first half hero Jesus received a somewhat harsh second yellow card, leading to tears and a tantrum as he headed towards the tunnel. 20 minutes to go and Peru pushed a little more but despite the tension they rarely threatened. Thankfully for Brazil there was to be no dramatic and nervy finish as substitute Richarlison (£1.92) converted a late penalty after a rather unique run up. The home crowd went wild knowing that was that, and the dream was finally over for Peru.

Two minutes later the final whistle brought down the curtain on this tournament and for the first time in 12 years the Copa was back with Brazil. In taking their 9th in total they kept their very impressive 100% record of winning the Copa America on home soil.

Jesus’ rollercoaster evening was complete as he returned to the field, this time with tears of joy. 37-year old player of the tournament Dani Alves showed there was plenty of running still in those legs and lifted the trophy in front of the elated Maracana audience. Beautiful scenes followed as the players and families danced and celebrated with fans, a truly special moment to have witnessed. Neymar who? Damn, doesn’t quite work with a one-word name.

When all was said and done I made my way out of the stadium, the atmosphere was fairly relaxed, more an attitude of job done rather than euphoria. I imagined how things would be if England had won the Euros. I guess that is the difference. Having won 5 World Cups, Brazil expect to win. To win is normal and anything less is abject failure, hopefully for the sake of the players the 7-1 can be banished into the history books now and they can look forward to defending their title next year.

A special mention has to go to Los Peruanos who brought the party from day one of the tournament, the huge flags, constant singing and relentless support endeared them to the hearts of the Brazilians and anyone else who crossed their path, just as they had a year earlier in Russia.

Back at Copacabana I took one last stroll up the promenade, ordered a Caipirinha and headed down to the shore. Only 30 metres away from the bustling walkway full of street sellers and kiosques, yet so tranquil and peaceful. A perfect time to stroll along one of the most iconic beaches in the world, taking in the sound of the ocean, enjoying the views and reflecting on what had been a wonderful month full of great memories, people and places.

As a tournament overall, it won’t go down as one of the greatest in history. Marred by low attendances, VAR delays, too many 0-0’s and another Messi failure at international level but thankfully the happy ending for the home nation.

On a more positive note I had the pleasure of watching 8 games in total, 7 of those in the Copa America across 6 different cities in my 5th major tournament over 4 weeks where I was lucky enough to visit the Maracana 3 times and watch the mighty Brazil 2 times. All in all another wonderful trip made possible by the single 1 greatest thing on earth….FOOTBALL!